Although most of their lives are spent in the ocean, sea-run brown trout seem to retain more of the eccentricities of resident browns than, for instance, steelhead do of resident rainbows. Moody fish, they must be shown flies the way they want to see them. The Rio Grande is a large river. Thus, it’s compatible with a wide range of techniques; critical since a large sea-run brown trout may demand that a fly be fed to it on the bottom one hour but rise to a skating fly the next. Water levels can change from week to week and they generally drop as the season progresses.

Vary your presentations in each pool fished until you find the right formula of fly, line, drift or swing, and retrieve. Also heed the advice of your guide, whose primary aim is to help you hook and bring more fish to the net.

Generally, the Rio Grande’s sea-run brown trout seem to lie near cut banks during the middle of the day, though in low water they will also lie in the faster necks of pools. They typically move into these areas during early morning, evening, and nighttime hours. A good rule is, “Tails in the morning and heads at night.” Also look for fish distributed throughout pools on calm, overcast days. On sunny days, one theory holds that sea-run browns take best if they don’t have the sun in their eyes, although this theory, like others, is often affected by the number of fish in a particular pool and the number of “takers.” 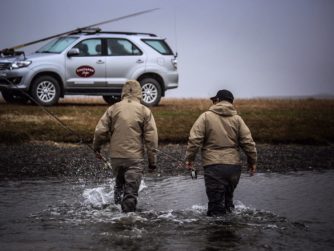 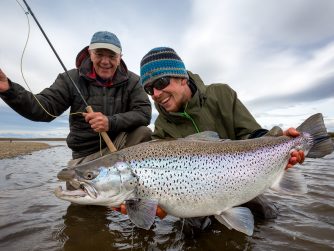 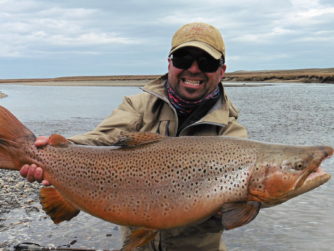 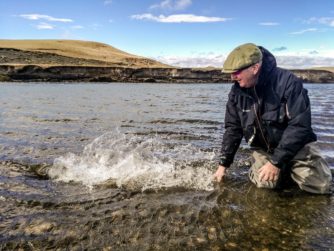 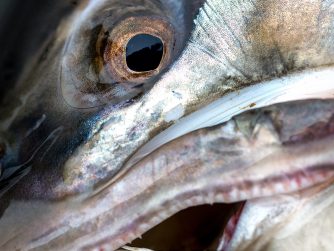 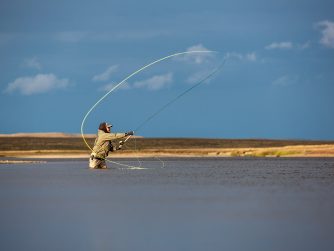 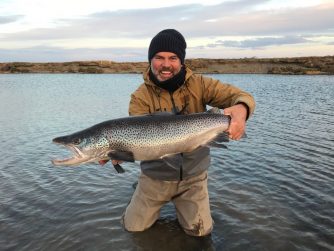 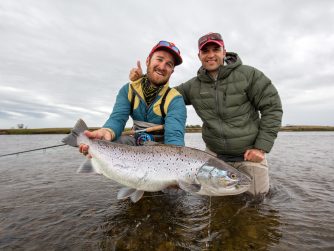 Guests will leave the lodge around 9 o’clock after breakfast, fishing till around 1 o’clock. Following lunch and a siesta (the duration depends on the season), guests return to the river in the late afternoon and fish until dark. Fishing hours will change slightly depending on the time of year.

The suggestions that follow are drawn from over two decades’ experience fishing the Rio Grande under a wide variety of conditions.

Single-handers in 7- to 9-weights—and up to 10 feet long—can also be effective in light-wind conditions on the Grande or for technical, close-range nymphing on the Rio Menendez tributary. Longer rods make casting easier with the normal downstream southwest wind, while an 8- or 9-weight helps you to drive your line into or across the wind when necessary. Given the Rio Grande’s moderate flow and generally even gravel bottom, you’ll find an 8 or 9 capable of doing battle with even the river’s largest sea trout (15 to 25+ pounds), while it ensures the most action with smaller sea trout (4 to 10 pounds).

Loop and Sage produces many of the best rods we use regularly on the water. In addition to a stalwart lifetime warranty, the company engineers several high-performance options perfectly suited for this fishery.

Floating lines are most useful during low-water conditions and in the early morning and evening hours, when sea run brown trout feed near the surface. Integrated sinkingtip lines also work great, while intermediate lines are also effective in some conditions.

For Spey rods, we’re mostly using shooting heads, from floating to fast-sinking (S4). Most shooting head can also be used with sink-tips so you can target different depths. RIO AFS are easy to cast and effective, whether fished floating or sinking. RIO offers sinking poly leaders for those lines. If you’re fishing a Skagit-style set-up, also check out RIO’s MOW Tip system in varying weights and sink rates. Fish Skagit heads for easy rod loading, for casting larger flies on heavy tips, and for effectively casting into the wind. Use 400- and 700-grain heads, depending on your rod.

Even experienced anglers often find their running line snarls when buffeted by wind. Prevailing southwest winds can be “harnessed” by roll casting or spey-casting, which eliminates the need to back cast—difficult to do with a trailing wind. We found that a simple roll cast carries even large streamers 35 to 50 feet across and downstream, or far enough to cover the holding lies. Weight-forward lines can be rolled effectively by stripping and shooting line during the cast. 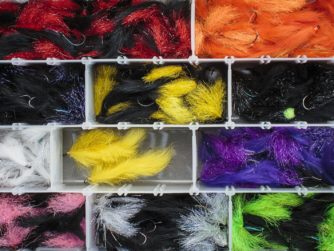 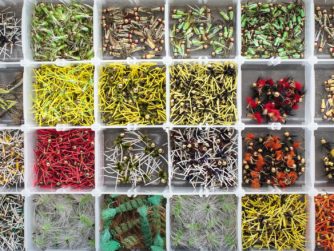 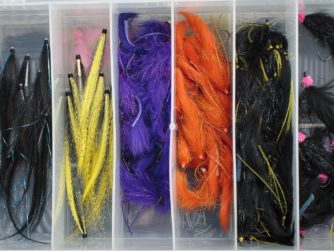 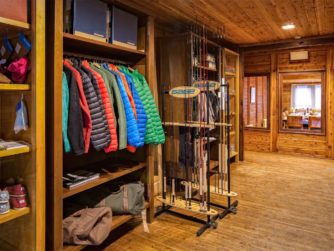 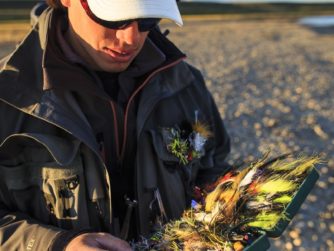