Another great week of great fishing in tough conditions, complete with ups and downs, strange weather, bright fish, and lots of laughs along the riverbanks comes to an end! We were welcoming a full house of good friends and a few new faces that we soon embraced into the Kau Tapen family. Sandy and Andy, who were starting their second week with us became an important part of our lodge life and it was such a pleasure to have them around. Dick (Richard) and Maurice, who we got to know here last year and who were such lovely chaps to spend time with, never too serious, always good for a laugh, and great fishermen to boot. Michael, joined us for his second week here and is always a wonderful person to have around the lodge. Roddy, who was here last two years ago, brought Kamal and Malcom along for their first time, who we quickly embraced into the family. And last but not least, Richard and his son Richard Jr., who mostly fished for steelhead and salmon before, but were looking to add a new favorite fish to their list.

Heading into the week, the water and weather conditions were very similar to last week’s. Fairly warm days caused the remaining snow in the mountains to melt, pushing the water level up in small increments. These small fluctuations of water level (~2 inches up and down), on top of the temperature changes, never allowed the river to settle and the fish seemed to be put down by these instabilities. Hence, the fish were fairly inactive during the first couple of days and the start of the week revealed itself as a seemingly tough one. Nonetheless, good numbers of smaller 4-9 lbs fish were around and some of them were playing along, and Malcom had a great start into his week with 4 fish landed, amongst them a great 15 lb fish just before dark to start into the week.

One could tell that these small but rapid changes in water conditions especially affected the larger fish and mostly smaller, very fresh fish in the 4-10 lb range were landed. Kamal had a great session and was able to land three good fish during his second morning! For the larger fish, one had to get a bit lucky to get the fly in front of the right fish at the right time, just like Richard, who was able to get a first good taste of a proper Rio Grande fish by landing a strong 14 lb fish. Malcom, who consistently put the fly into the right place, managed to land another healthy 15 lb male fish on his second day, and so was Roddy amongst other beautiful fish.

The river conditions remained inconsistent until midweek, with water levels bouncing up and down, and the larger fish laying low in the pools for the most part. On top of that, bright sunny skies and low wind required very delicate casting while still fishing heavy tips in most occasions. Despite these rather tricky conditions Michael was able to land a stunning 17 lb fish during his third morning, and Malcom and Roddy had another cracking session hooking into six fish. During the day, the wind slowly picked up from the east and pushed the wet ocean air towards the Andes mountains. By Tuesday evening, a thick cloud cover had built up that would soon open a consistent rain over us during the night to Wednesday. The rain persisted through the entire next day and into the following night.

The weather was miserable, cold, wet, and brisk winds were still howling upstream from the east. That did not stop us from celebrating Malcom’s birthday cheerfully in the lodge, and while the conditions were tough on the fishermen, the river seemed to stabilize during midday and the bigger fish came back on the take during the evening session. Those who persisted in these unfriendly conditions were rewarded with an amazing evening session. Just like Richard Jr., who had a incredible session on the Menendez, hooking into 5 good fish, amongst them a beautiful pair of 15 lb and 16 lb fish, both on the single hander. At the same time, Sandy had an unforgettable evening on the main river with 7 fish hooked, all in the double digits, with the two largest landed standing at 17 and 20 lbs, while unfortunately losing another couple of the similar size. The big fish were surely on the take, and Sandy had obviously found his “mojo” back that he seemed to have lost during the first couple of days, landing two more unbelievable fish of 20 lbs amongst some other good fish on the next day, while Andy – both fishing together in the same rotation – was able to bring a stunning 17 lb fish to the net. What a great birthday present for Andy, who’s day of the year was just one day after Malcom’s! While most of the big fish had been in the river for a while, the cracking 16 lb fish that Dick landed during his morning session was completely silver-bright – as fresh as they could possibly come – and so was the 14-pounder that Michael managed to land in one of our upper pools. What a great sign, and what a great day! But the man of the hour remained Richard Jr. who hooked into a monstrous sea trout that, during an exhilarating fight, pulled him into the next pool where it could finally be safely netted. It tipped the scale at 24 lbs and would claim the title of the longest fish landed in our Rio Grande waters this season, measuring an amazing 96 cm. What an amazing fish, fight, and surely a memory that will not be forgotten anytime soon.

Even though this week’s fishing was very unpredictable and random, the second half of the week turned out to be very productive, both in terms of numbers and size of fish landed. Wednesday’s rain, that poured down the Río Grande’s and Río Menéndez’ headwaters, affected the rivers here with a two-day latency and on Friday morning, both rivers had come up overnight and were very colored. The visibility was limited, but just enough to fish big leeches and intruders. Although every angler had already hooked into and landed numerous good fish along the week, the last morning blessed us with very good fishing despite the murky and high water. Lots of fresh fish had entered the river on the last full moon and were now running through our beats. Roddy finished his week strong, landing 4 great fish in just a few hours, and so did most of our other anglers. Amongst the fish landed on this last day, most fish were fresh, in the low double digits, and in outstanding condition. A great sign and a happy ending to an eventful week that felt a bit like a fast roller coaster ride!

While it is challenging to adapt to new conditions every day, it makes the fishing much more interesting. One day we were casting big leeches, and the next day we were catching fish on small nymphs and green machines. There was no pattern, and experimenting was the key to success. For all of our guests who fished with us in previous years at the same time, it was a completely different river they experienced this week, and for us guides, it makes our job a bit tougher but so much more interesting!

This week was surely over far too quickly, and while I am sad to say goodbye to all these lovely people, I am much looking forward to the next time we get to fish again. Thanks for an outstanding week, where old friendships were fostered, and new ones made! 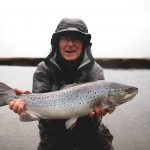 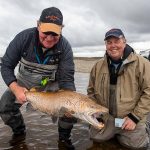 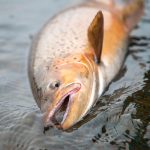 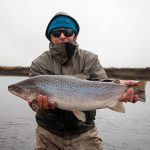 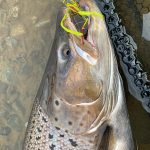 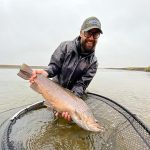 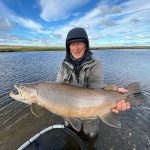 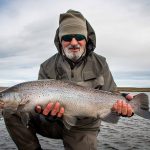 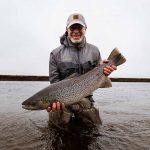 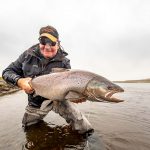 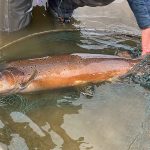