Well another week has gone by here at kau Tapen Lodge. We have been blessed with beautiful weather and moderate winds, however the river is low and not optimal for fishing. That being said we have had a fantastic week that has past. A total of 94 fish were landed between 8 rods with 126 hooked. Pretty good hook to land ratio meaning we had some good anglers with us.

Fish of the week goes to Olof Risto with a beautiful 18lb hen fresh from the sea. Another beauty fish landed by James Oliver of 17lbs was a close second while Kjell Askling showed the rest of the group that although he is new to the two handed rods he can fish with the best of them. Kjell landed a monstrous 86.5cm buck, his first big fish on the rio grande. He followed it up with another 15lb hen the following morning.

A big thanks to the guys and gals of week two. Safe travels and we’ll see some of you again next year. James Thorpe also get an honourable mention as he was awarded with a certificate of competency for using the Kau Tapen sauna. Big shout out to James (Clapping hands!) 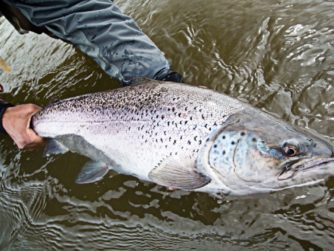