Well that one went quickly! It seems like yesterday that the group arrived, and now I’ve just said goodbye. As they say, time is relative. Then again, I guess fishing is too.

Anyway, this week was defenatly a quality over quantity week. Despite catching fewer fish than previous weeks, we landed 5 fish over 20lb this week. The largest being 23lb. The total landed fish for the week capped at 88 fish.

At the beginning of the week we had a good rain which despite soaking the ground, did little else to the river other than to discolour it, albeit fractionally and only for a few hours. The level might have gone up an inch or  two, which was bit of a disappointment. I don’t know where it all went to. Re-filled the beaver holes I guess.

It’s getting colder everyday, the water being no exception. We’ve started getting more and more fish on larger flies, so if you’re on your way here, don’t forget to pack a couple leeches and sunrays.

See you on the water 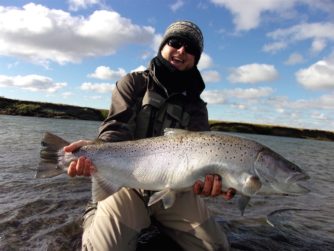